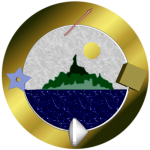 The Atlantean tribe in Widelands is but a remnant of an ancient culture that once ruled an island now buried under the ocean. They once had a thriving civilisation where education, science and art was held in high honour. Astronomers looked to the stars and created maps, showing their ways - maps that were thankfully received by the sailors of the Atlantean fleet. Geologists experimented with all known minerals and ores and found ways to perfect materials for all uses. Really, there was hardly an art or any craft that was not pursued by some rivalling schools, and most vividly debated. Newly discovered theories would sometimes raise a dispute among schools for weeks that would fascinate all parts of the Atlantean society, so that all else came to halt. It was a realm of abundance where the daily needs were for granted. No Atlantean would be willing to work the fields in those days as this occupation could not satisfy their hunger for beauty and perfection and was generally considered inferior. In stark contrast the art of cooking was being perfected in each and every household. There were family recipes, handed down from generation to generation only carefully modified after years of testing. What you feed on was regarded as a very personal thing, and cooking soon became a centerpiece of the Atlantean philosophy. Only such food processing like baking and smoking, that require facilities of their own were exceptions  and it took some time before those recipes could be agreed on. So it came, that gradually the inns that originally existed, were dying out. A few remained for slaves and the occasional foreigner, but no true Atlantean would ever set foot in one. Atlanteans also do not drink Alkohol. It gives them a headache and they never liked the effect of it. Yes, there were Slaves. Not bound in chains and owned by some Atlantean though. All slaves were officially owned by he King's household and properly cared for. Simple jobs, like the distribution of goods and letters were given to those unfortunate members of lesser tribes, that the Atlanteans took home as prisoners. Their time as slaves was usually limited and young men in their twenties were preferred.

There was one remarkable exception though: As an offspring from their geological research, the Atlanteans developed very clever mining techniques. And though the work was still tedious and dirty, they would not let foreigners or slaves into their mines and preferred working there themselves. Much wealth came from trade with lesser cultures that valued Atlantean craftsmanship highly. Altantean ships were often seen on the waters of the seven seas as they brought riches from far-away realms to the homeland. Many came from defeated former enemies that were made to sign treaties and pay taxes - usually in the form of victuals. All crafts were practised with a high level of perfection, and their craftsmen took pride in paying attention to every detail. Always they would seek for the ultimate in function and design trying to surpass the creations of their elders. Thus Atlantean workmanship was renowned to a point where those lesser cultures look upon atlantean products as being  magical. Most famous are their tridents that they rely exclusively on in warfare. No one has ever managed to copy such weapons. Nor has anyone else ever surpassed the Atlantean warriors in wielding them. True, they are masterpieces of ancient craftsmanship - but their real  magic is one of training.

But ever since Atlantis has drowned, those few refugees that escaped face a life much harder than they were accustomed to. The slaves that could save themselves have long escaped and the work that now needs to be done has not become less. Nothing remains of the sophisticated machinery that once was at their command. And no ships bring wares from outside. They still have their knowledge and skill - and a firm will not to perish in a world of enemies. Will it suffice to maintain the Atlantean culture and bear witness of the once blissful realm?