The purpose of this page is to collaborate on making a single camera and lighting setup to use with Blender for generating 2D images of buildings and bobs with common perspective and shading.

More documentation is available on the Graphics Development page.

Selecting an issue to work on

Media bugs and projects are tracked in the Widelands repository, and they all carry the media label.

Our models and animations for widelands can be found in our media repository, which has a separate project on launchpad, at

See Bzrprimer to learn how to download and collaborate. Widelands itself is on GitHub, see Gitprimer for help.

You can use these files as an example, and/or style guide.

Also, for rendering all directions and creating the playercolor masks we have a python script (currently for Blender 2.7), for consistency's sake we recommend using our templates which can be found at "graphics\stock_sources\blender_set_templates\empty_building_template.blend" and "empty_worker_template.blend". If you want to work them into a model created previously, the scripts from "graphics\tools": "innerBuilding.py" or "innerWorker.py" are the files to actually include.

nb: currently, some of the .blend file might contain an error in the script. If you see the script is bugging simply replace it (copy/paste) with "innerBuilding.py" or "innerWorker.py".

HOWTO make a graphic with blender

For these scripts to work, there are two things you need in the model:

After this open up a text display in blender with the relevant "inner" script, move the mouse over it, and press Alt-P. The rendering menu should appear:

Start with the above file or any attached blender file you find on the page. But make sure that the lighting (dropped shadow) matches approximately with Widelands. You can also import pre-made models into the base.blend file. Simply go to File->Append, browse to your file, append the scene you want. Switch to this new scene, select all the objects you want, press ctrl-L and select To Scene. Then remove the imported scene and you have your new objects in the first scene.

Design your object around the center (0,0,0), after this, select camera, camera-target and move them along the z axis till your object is in the center of the camera. Render a big picture without shadow (disable the ground plate on layer 11), AO enabled and high sampling rate, and on KEY render type (not SKY). Make this pic around 640x480 pixels big and save it. If your object drops a shadow, enable (shadow only) on all your materials and turn off AO, render again with your ground plate enabled. Save this pic as "shadow" or something. It only contains your background color and black spots, where shadow is.

When you resize, make sure you always turn interpolation off! In the Gimp (or any other Photoshop like tool), resize your picture to 24x24 for menu pictures (if it is a ware, you can get the queue_empty picture by overlaying a black layer with darken_only enabled). For the on-map pictures, resize to appropriate size, also resize the shadow pic, then copy the pic over the shadowpic - eh voila, you're done. Do this for every frame of your animations.

This is just my idea, but I say using " MIR dot net "(multiple image resizer) would seriously speed things up with animations.

Getting the animations into Widelands

This section explains a workflow that you can use to export your Blender files to *.png files for use in the game. We will use the Empire's Armorsmith as an example.

For this section, you will be working in the widelands-media repository.

First, we'll need to load one of our export scripts into Blender. 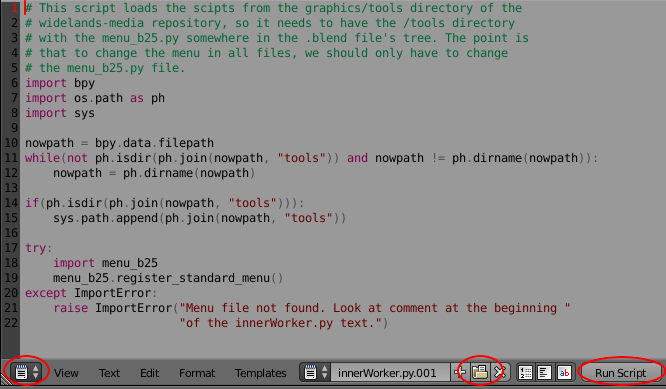 Now we are ready to configure our export. 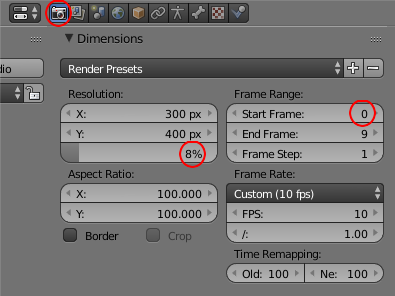 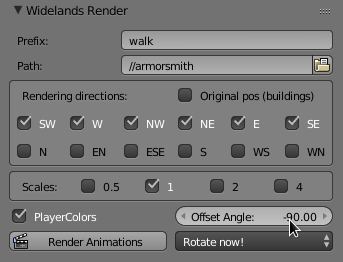 Adding the animations to Widelands

From this section onwards, you will be working in the widelands repository. We'll stay with the armorsmith as an example.

In order to save disk space, we work with spritesheets. We have a tool for that called wl_create_spritesheet which you have to run in a terminal. Running the tool will also crop the animation, so it's worth running even if you animation has only 1 frame.

This is what the generated Lua code looks like:

In order to save even more memory, we use some external tools for optimizing the *.png files.

On Ubuntu, you can install them via sudo apt install advancecomp optipng pngcrush.

Install the tools that you can find, then run:

Now you're ready to add the new files and your changes to init.lua to the repository:

Note: DO NOT use git commit -am, this will not add the new files to git!