We'll be moving everything except for widelands-media to GitHub. This page explains how to obtain the source code and how to work with it. We are prodiving instructions for how to do it on the command line / in a terminal, but we recommend that you also use a GUI client to make your life easier.

First, you will need to download install Git on your machine. Follow the instructions on the Git Downloads page. We also recommend that you get a GUI client.

Getting the Source Code

Rather than working on the Widelands repository directly, you will create your own fork, work on a branch there and then make a Pull Request when your code is ready. If you don't expect to be working on the code and only want to play the development version, call git clone https://github.com/widelands/widelands.git --depth 1 on the command line and you're done.

We want to set up both your fork ("origin") and the original ("upstream") repository on your machine. Your fork is for you to work on, and the upstream repository is for keeping up with the changes in our master branch. We will also be using the "depth" parameter to speed things up - if you want the full commit history, just leave it out.

Note: You can speed up downloading by calling git clone https://github.com/<userame>/widelands.git --depth 1. This will download only the last revision. But this will prevent you from keeping your fork in sync with the main repository, because all revisions will be needed to do so.

Working on and contributing code

If you plan to be working on multiple branches at the same time, see Checking out into subdirectories - we haven't worked out the details of that one yet, so please feel free to contribute to this Wiki page.

You should always work in a separate branch for each feature and never on the master branch. For creating a branch, run git checkout -b <branch_name>.

2. Commit and upload your changes

You should always keep in sync with upstream's master branch. Call git pull upstream master and follow the instructions. Once you feel comfortable with Git, you can also consider rebasing instead.

After BuildingWidelands and making your changes, you can do a local commit.

Note: If you did not add any new files, you cann add and commit at the same time by running git commit -am "Commit message".

3. Get your changes into the game

Once you are happy with your branch, it's time to hit the "Pull Request" button on GitHub, so that your branch will be merged into our master branch.

See also Merging in bzr: The git approach vs the bzr approach

Working on your code 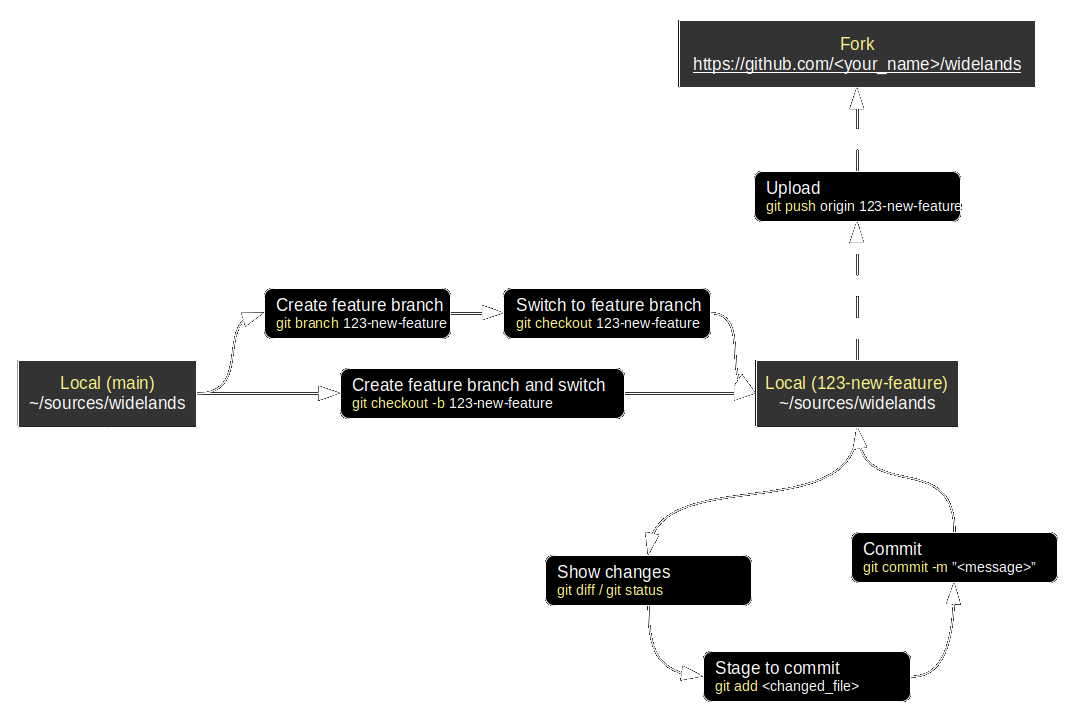 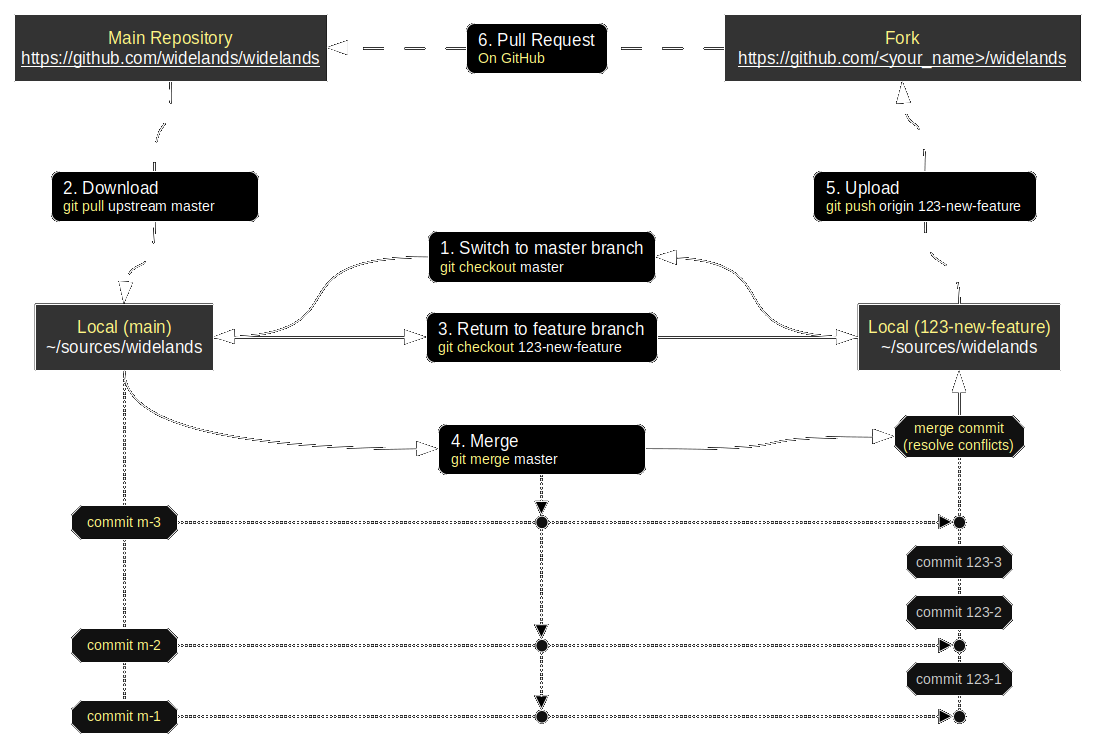 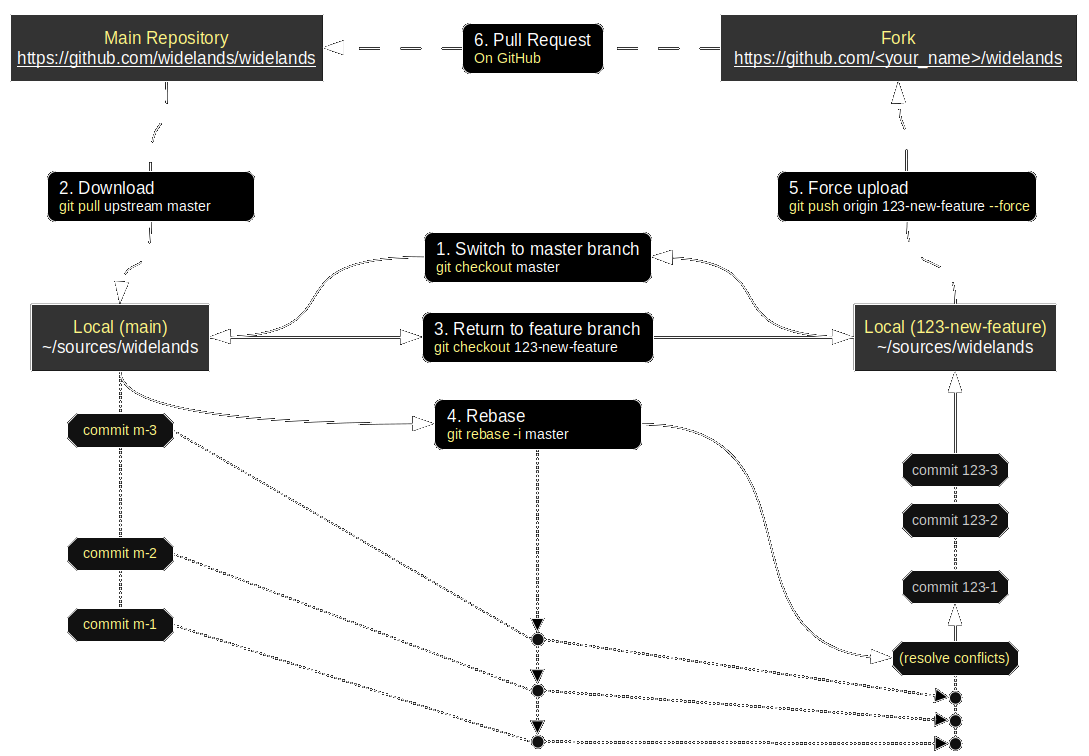 Checking out into subdirectories

Since our bottleneck is compile time rather than disk space, we will want to be able to check out into subdirectories, just like Bazaar does it. There are 2 ways of doing this:

Using ssh instead of https

Tired of typing your pasword all the time? If so, this section is for you.

If you do not have an SSH key already, follow the instructions on GitHub. If you already have a public ssh key, you can reuse it with GitHub.

You may have to adapt the file ~/.ssh/config and add these lines:

Leave all entries as shown and change only the PATH/TO/SSH-KEY.

If you have formerly used https you have to change also the urls in the file folder_of_repo/.git/config by replacing https://github.com/ with git@github.com:, e.g. for "upstream":

Checking out a branch from somebody else's fork

Assuming somebody else's fork is called 'smbd_else_fork' and the branch is called 'new_feature':

The last message you see should be:

And this is what the commands mean:

Clone the main Widelands repository and change into its directory. You only need to do this if you haven't already. --depth 1 means you only fetch the latest revision, which will speed things up. You have to omit that if you want to keep your local copy in sync with the main repository.

Register the fork of somebody else fork and call it "smbdy_else_fork". You can als choose another name by using git remote add another_name https://github.com/smbdy_else_fork/widelands.git

Register what's in smbdy_else_fork. Again, --depth 1 will speed things up. Git should tell you about the branches that it has found at this point.

Switch to the branch.

Note: If you want to change forks for your local branch, call

Note: In principle, you can git add as many forks as you want on your local machine and call them anything you want. You can get a list by running git remote -v.

Checkout out and tracking a remote branch

This is how to checkout a remote branch from a specific fork and register it as the push and pull location for the branch. First, you get the information about the branches in the fork and their status:

Then you switch to the branch while telling it to track the remote source:

Now you can push and pull by simply calling:

To list the relationships between local and remote branches, call

warning: inexact rename detection was skipped due to too many files.

You can get rid of this warning by running

You can then abort your merge with

And do a fresh merge after that.