Tutorial to the Widelands' Map Editor

Bobs are such objects as mushrooms, monoliths, rocks, trees or animals. Some of them - like the latter three - are valuable resources, and all of them are used to spice up the map. You place them with the Bobs Tool (animals) and the Immovable Bobs Tool (all the other objects).

Such Bobs as mushrooms or dead trees have no game effect - they disappear when something is build on them. Place them wherever you deem it looking interesting; for more realistic effects consider the terrain. Dead trees, for example, would surely fare well on dry steppe or desert, while mushrooms probably belong into greener environments. Nevertheless you are allowed to place Bobs anywhere you want to; for instance, you may even place trees onto mountains, even though a ranger in game must not plant trees there.

Rocks and trees however are very important, as they are a source for granit and wood. On most maps there is a couple of them close to the starting point. Again, it's up to you whether you want to make these resources common or rare. Keep in mind also, that these are obstacles to building yet disappear when exhausted - a tree disappears when chopped down, rocks may need several approaches - so you can place them on a plane with place for large buildings, thus preventing these buildings to be built there until the resources are exhausted.

Resources, on the other hand, are coal, granit, gold, iron, fish and water. Every field has a value determining which of these resources is present on the fields and in which amount. Some resources may only be placed on certain terrain. For the 'greenland'-terrain set for example these terrains are:

Except for fish, their presence must be determined by Geologists since they are not visible on the map and do not influence what may be built on the field in any way. Many fields have default resources, placed there automatically if you do not alter them.

You use the Resources Tool to place resources. You may increase (no key hold), decrease (SHIFT) or set (ALT) the value of the resource you have selected for fields within tool range. Note that fields have a maximum of resource they can hold; on 'greenland' this maximum is 20 for the ores in the mountains and fish in the water, and 50 for water on steppe/grasslands. The value means how many units of that resource can be extracted from the field before it is exhausted; note however, that all buildings extracting these resources (mines and wells, fishers anyway) do so not only from the field they are placed upon but also from the surrounding ones.

Resources are probably the easiest way to make an area worth being conquered or fought for. Especially if it holds a resource rare on the map. An easy way to force the players to expand is to place some resources - say coal and iron - close to them, but other ressorces - say gold - much further away. Also by placing not too great amounts of a resource you make the players looking perpetually for new supplies. 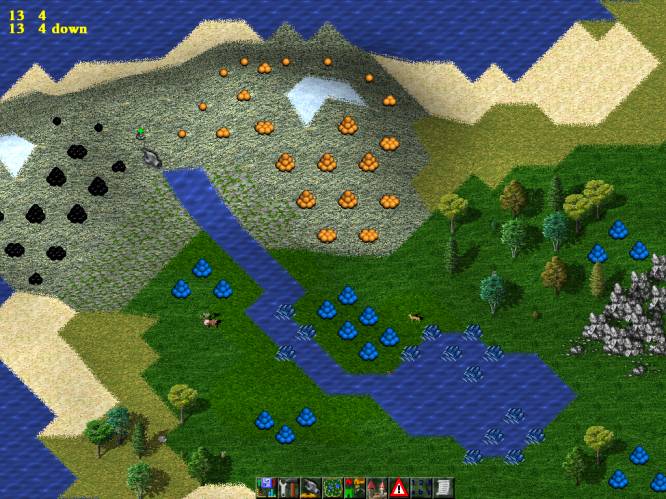 Here we have an example for a good starting point. In the mountain to the north we have a decent coal supply and also enough iron for the beginning. To the left we have some rocks and a big forest below, inhabitated by some animals to be hunted down. The little lake contains more fish than average water and the ground to the east of the river is especially rich in water. With such starting conditions it would seem logical to place such resources as gold and more iron into a mountain further away; maybe just in the middle between this player and his opponent, in order to make it fought for. Or maybe a gold supply for both of them in two different mountains, yet each close enough to the other player to make it threatened continually, thus creating a more interesting situation. Or maybe a safe gold supply, if you prefer that - the choices are limitless...

Place your Bobs and Resources - remember, trees make also a great addition to the landscape, not every tree has to be placed there for resource-reasons - and move on to the last part of creating the map .