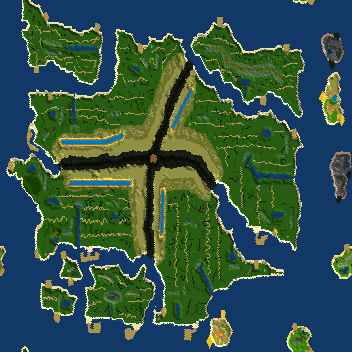 an archipelago with one large island in the centre. All of the small islands are inhabitable and each has different resources.

Build a ship with the gold from the small mine that is located near your closest harbour site. Previous inhabitants have marked the mine with small rocks and a standing stone. There are places where the water is too wide for Ware carriers to cross on foot. Use a ferry to overcome this problem.

This group of Islands has one large island with a volcano in the center. Previous inhabitants have buried small deposits of Gold on the main island at eight places near areas that they used for harbors. They have marked these Gold deposits with small rocks and erected standing stones. They also cleared other areas on all of the islands in the archipelago and prepared harbor platforms.

There are plenty of resources on all of the islands including Gold. However; Gold on the main island is only found in the previously mentioned eight man made deposits.

This map is a variation of Southern Archipelago Mark i. The additions were made with the Amazon tribe in mind. Of course you can play with any of the tribes, but the Amazons can increase the fertility of the ground and the additions provide an excellent opportunity for this.

Several of the natural water courses have been widened. Each of the four areas on the main island have an aqueduct that was developed by previous inhabitants. The Ferry tag has been activated so your tribes can traverse the wider water features.

This map requires a version of Widelands 1.0 or newer!