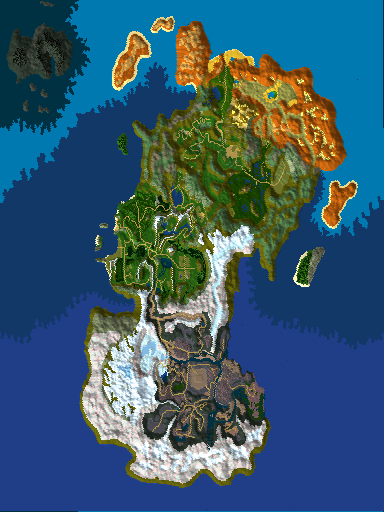 Places for medium and big buildings are in the places where the city, farms, ruins and other buildings are in Gothic game. No coal. Stone: in place of caves. Iron: in place of magic ore mines, Greg's treasures in Jarkendar, a cave on Pirates beach, a cave north to the city, a collapsed mine next to Xardas, the Sleeper's Temple. Gold: dragons treasures, thiefs treasure, a bandits gold mine, a Test of Fire cave next to black troll, a cave next to the pyramid, a cave on the beach next to Pirates beach. The are two ways in the mountains from Khornis to Jarkendar and one long way in the mountains from Mine Valley to Jarkendar.

This map requires a version of Widelands 1.1 or newer!