This part of the Game Help explains the buttons on the starting screen, options and multiplayer. If you are looking on help about Gameplay, see Gamehelpingame

When you start Widelands you first see the splash-screen and get then to the starting menu: 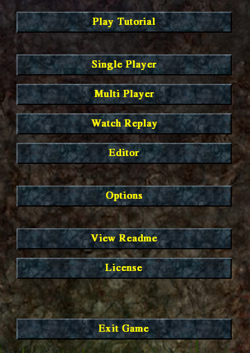 You have the choice between different tutorials (currently four), and each covers a different topic: The basics (how to build streets and different buildings, how to expand your territory), military stuff( how to train your soldiers and how to start a battle with another tribe), seafaring (how to colinize islands) and an overview over the economy settings.

Allows you to open a game in order to play alone or against the computer.

To start a new single player game and choose the map you want to play on. At the top are several filter options to minimize the scope of displayd maps. Selecting a map will show some information at the right side. If you click on 'OK' the next screen opens.

After having chosen a map, you may chose the starting positions (click on the flag on the left). The Checkbox

allows you to disable or enable computer players. You can always lower the number of computer players, you can even play completely alone on a multiplayer map. Further buttons:

An important choice is the 'Type of Game': Read the tooltips to get informed about each gametype.

For one map ('The Green Plateau') you can choose to play it as scenario (with Barbarians).

Here you learn step by step the history and economy of the different tribes. To present, there are three campaigns, one for Barbarians (first to play), one for Empire (can be played after the Barbarians campaign) and a Atlantean campaign (can be played after the first two have been finished). The campaigns consist of several scenarios, which get revealed one after another.

Loads a previously saved single-player-game (with one human and 0 to x computer players).

Allows you to open a multiplayer game for several human players either over Internet or LAN. For more technical information on this subject, check out the Gamehelpmultiplayer.

You can choose to be a spectator or a player with a certain color. As a spectator, you'll see the whole map and the contents of all buildings of all players. You will also be able to chat with the players but you cannot participate in the game. As a player, you can choose all colors marked "open" in the Player settings

To the right of the client list, next to the player color flags you can choose your tribe (Barbarians, Empire, Atlanteans), your initialization (headquarter or castle village) and -if you want to - you can create teams.
Two players (widelanders with different colors) in a team cannot attack each another and share a common vision. They do have their own stock and can only control their own land. The two team players do not need to be of the same tribe.

The players (widelanders) which are not controlled by humans can be controlled by a computer client. You can choose if it should be aggressive, normal, defensive or none (which means a headquarter standing around and doing nothing).

"Shared in" means this starting position is controlled by one of the other players (widelanders with a certain color - may they in turn be controlled by one or several humans or AIs).
Example: On the yellow starting position you have chosen "shared in" the red player. So there will be no yellow player (widelander) in the game. The position once marked yellow on the map will have a second red headquarter. The red player can see two red starting positions and can control the widelanders in both of them. It is like one widelands nation on two distinct map points. They are automatically the same tribe. The stock, message box and the statistics are also shared.

You can see information about the map here. There is also a button to load another map or saved game. Below this you see the chosen win condition (see here for definitions of the win conditions ).

Allows you to watch the replay of a previously saved game. This can be useful to hone your tactics or compare yours to the enemy's. Please note that a replay can only be watched without errors if you have exactly the same version of the game for watching as for creating the replay.

Opens the Widelands Map Editor, which you can use to create your own maps, scenarios and campaigns. For further information on this subject, check out the Editorhelphelp.

Allows you to set game options, such as: