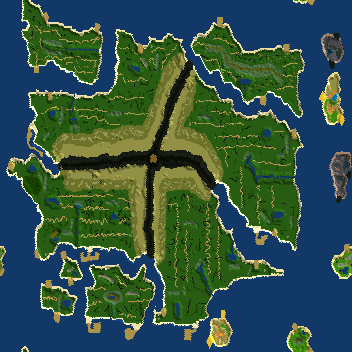 an archipelago with one large island in the centre. All of the small islands are inhabitable and each has different resources.

Build a ship with the gold from the small mine that is located near your closest harbour site. Previous inhabitants have marked the mine with small rocks and a standing stone

This group of Islands has one large island with a volcano in the center. Previous inhabitants have buried small deposits of Gold on the main island at eight places near areas that that they used for harbours. They have marked these Gold deposits with small rocks and erected standing stones. They also cleared other areas on all of the islands in the archipelago and prepared harbour platforms.

There are plenty of resources on all of the islands including Gold. However; Gold on the main island is only found in the previously mentioned eight man made deposits.

This map requires a version of Widelands build 19 or newer!