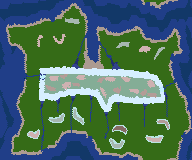 This is an island with a snowfield plateau. There is dangerous snow almost the whole way round the plateau. Only a couple of places allow access where the water has melted the snow. Previous inhabitants have ravaged the mountains on the north of the plateau. Small amounts of each resource remain hidden by rocks. One benefit that remains from these inhabitants is that good fishing areas are marked by a standing stone. Resources in the southern mountains remain untouched.

Climb the plateau to get to the large gold deposit.

This is a map for two players.

Although the map is one physical land mass you can speed up your expansion by building ships.

Each tribe has one gold mine close to the headquarters. If you use this gold to build ships instead of growing your army you can conquer the whole map much quicker.

This map requires a version of Widelands build 19 or newer!